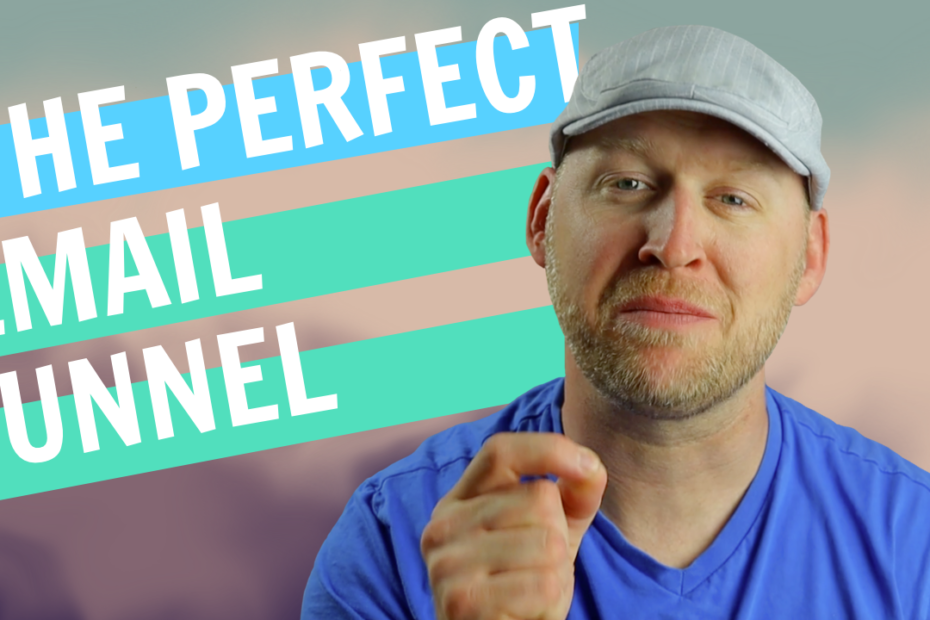 This article is also a brand new video on YouTube. Check it out here

Newsflash: the perfect marketing funnel is absolutely nothing without email. So in this article I’m going to take you through the perfect email marketing setup to cultivate your sales and move people down the funnel.

Before we jump in, we should do some quick setup so you understand the approach I’m taking here. First, I assume you’ve already moved the users we’re talking about to your page at least once or twice. What this means is that we’re talking about the middle-of-funnel here. We’ve reached this point in the funnel because people are interested in taking the next step with you. That means they’re willing to give you their email in exchange for something.

We’ll use the example of an eBook giveaway to really drive the point home. So, here’s the scenario: the user gives you their email and in exchange, they get an eBook on a topic they care about.

This is oftentimes more effective than a newsletter funnel.  People know now that the word “newsletter” is a sneaky way of telling users they’ll be marketed to relentlessly, so they tend to avoid it.  But if you’re providing value in the form of an eBook or free training that they can take advantage of right now, that’s much more interesting for the user, so they’re more likely to provide their email.

Sorry, this isn’t sexy, I know, but under the GDPR in Europe, you have to do it because if you don’t, you can get sued for boatloads of money.  It can cost you so much that your business could potentially be destroyed on one of these claims.

So let’s not risk it.

This is how it’s going to work: So let’s say you’re scrolling through a website and you see an eBook being offered for free.  You’re interested in it, you click on it to download itIn exchange, you’ll get a request for your email address.  So you enter the information and click the button to continue toward downloading your eBook.  In the background, you’re now added to a list of unconfirmed subscribers (we’ll call it “Subscribers-Unconfirmed”).  You’re “unconfirmed” because the double opt-in hasn’t been completed and you haven’t confirmed that you want marketing emails yet.

And at this point, where you’re added to the list, you’re also automatically added to an automation.  The automation is set up to send them a confirmation email and then check if they clicked on it.  That’s it.  The email doesn’t have to be complex, either.  It can simply say “Hey, if you want the eBook, you have to click on this button to go back to our site.” Once they click on that email, they have double opted in. What happens in the background is when they do that, they get de-listed from Subscribers-Unconfirmed, and they’re added to the list Subscribers-Confirmed. This is the list of people you can directly market to.

Now, what happens if they didn’t click the email after two days?  Unsubscribe them completely from every list and delete them from your email system.  There is no point in keeping that person on your list. It’s just going to cost you money.

All right, so much sexier is your primary automation and this is where you’re pitching people. So, the idea here is that you’re starting with content and you’re gradually moving towards sales. Your first two emails are going to be very content heavy. Your third, a little more salesy. By the fourth on the fifth, you’re pushing the sale.

Here’s the technical side of it: You’re sending an email every 48 hours.  After each email, you wait 48 hours and then look for whether they bought the product or even simply opened the email.

The opener path is all about pushing them towards the sale. And so you’re looking at more calls to action in the emails, more benefits to the user, etc., so that you can get people to make that purchase.

And at the bottom of the opener side, if they bought, then you put them in a list to cross-sell or upsell because you’ll definitely have more products in the future to do that with.  If they didn’t buy at the end of the automation, you’re going to put them in another list to retarget on Facebook and other platforms.

If the user didn’t open anything by the time you get to the fifth email, then it’s probably time to think about putting them in a win-back or scrub automation where you effectively send an email asking, “Hey, look, do you want my emails? Or do you want to just be deleted?” And at the end of that, if they still don’t open or respond in any way, you can you can delete them because chasing these people is just a waste of your time anyway.

Okay, so your cross-sell automation is basically the same thing as your primary automation. You’re pushing them down a series of emails, but you’re first looking at what the user has already bought.

Let’s say you have three products and somebody has bought one or two of them.  Before you know what to sell to the user, you have to first understand what they own. So you put them in an automation that sorts them, which allows the email you send to be based on specifically what they did and did not buy.

So there you go. I hope that was helpful for you. Those are my top three automations. If you want to see them written out, to understand them a little bit better, I put them in a quick PDF so that you can see the layout a little bit more clearly and kind of understand how they work together.  You can get that here.  So make sure that you grab that from my site, completely free, no obligations at all.
Otherwise, if you want to see this in video form, you can see my brand new YouTube video on the topic right here.  I’ll catch you next time!